New Vehicle Information Jun 14th, 2012
A smaller MINI wearing the colors of the Union Jack is a tribute to London Games 2012. We are unsure if the Rocketman will make it into production, but the styling cues seen on this concept could make it on to the next generation MINI Coopers. Read the press release and a full gallery after the Jump. 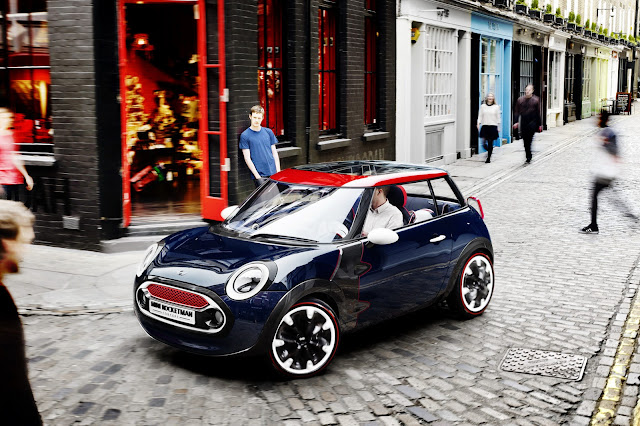 A tribute to the capital of Britain: The new-look MINI Rocketman Concept.

Press Release: Munich/Oxford/London. This summer the best athletes from some 200 countries will gather in London, England for the London 2012 Games – the biggest sporting spectacle on the planet. A total of 302 medals for the Olympic Games and 503 for the Paralympic Games will be up for grabs between July and early September, but the Games are about more than outstanding sporting achievement alone. The event plays a particularly important role as a platform for cultures to interact. And for London itself, there is the opportunity to once again put its best foot forward as host city. British premium car brand MINI will roll out the red carpet for the Olympians and Paralympians with the new edition of a spectacular small car study first presented at the International Geneva Motor Show 2011. The new design of the MINI Rocketman Concept combines innovative ideas for personal mobility in major cities with classical, unmistakably British design features inside and out. This extraordinary car will be on show in the BMW Group Pavilion, which is located close to the Olympic and Paralympic Village and will act as a showcase for the company during the Games.

The MINI Rocketman Concept caused quite a stir at the Geneva Motor Show 2011 as a ground-breaking new concept car majoring in driving fun in tight spaces. The 3+1-seater, with its three doors and an exterior length of just over three metres, is imbued with the timeless core values of the brand: irresistible design, clever functionality, smile-inducing agility and exceptional efficiency. In the process, it also offers a very contemporary take on the “creative use of space” principle that has held sway at the British carmaker for more than 50 years. The concept car approaches classic Mini territory in terms of dimensions, while advanced technology underpins a lifestyle-focused mobility solution equipped for life in large cities such as London over the years ahead. The MINI Rocketman Concept’s spaceframe is made from carbon-fibre-reinforced plastic, enabling a lightweight construction. Its innovative interior concept accommodates three full-size seats and an extra seat suitable for short journeys.

A commitment to British style and the roots of the brand.

The new edition of the concept car sees MINI reaffirming its commitment to the brand’s British roots. The classic Mini reached out from its homeland to leave an indelible mark on roads around the world, and MINI Plant Oxford now produces no fewer than five models for the brand’s global markets. The new MINI Rocketman Concept wears its British heritage on its sleeve, most prominently in its exterior and interior colour schemes and more subtly through the use of extremely high-quality materials and stylish details. All in all, it embodies a typically British form of sporting elegance.

The colours of the British national flag, the Union Jack, come to the fore on both the outside and inside of the car, red and white accents accompanying the dominant dark blue. The body’s non-metallic paintwork is interspersed with exposed carbon components at the front end and around the doors. And the 18-inch light-alloy wheels have white polished areas and a metallic red accent. Matt Porcelain White paintwork is also used for the mirror caps, boot opener and surrounds for the radiator grille and headlights.

The grille structure – made up of MINI logos – could certainly be described as an “eye magnet”, thanks also to its red metallic paint finish and contrasting white surround. A red strip emphasises the path of the hallmark MINI diagonal link between the wheel arch and door at the foot of the A-pillar. This takes a particularly chunky form on the concept car and also makes a feature of the door hinges. The two-section split boot opening consists of one upward-pivoting element and a second segment which extends out of the body in the form of a drawer – and which is also painted blue on the inside in the new MINI Rocketman Concept. The rear lights have a trapezoidal stirrup design and work using projector technology.

Another special feature is the distinctive lighting design for the roof. The concept car has a full-surface glass roof, whose illuminated braces recreate the look of Britain’s Union Jack flag. Even when the roof is not illuminated, the braces – running horizontally, lengthways and diagonally – continue to shine in bright Porcelain White. In darkness, the integrated optical fibres provide a pleasant indirect illumination of the interior and a compelling night design visible from the outside. On the new MINI Rocketman Concept, the roof’s transparent surfaces are bordered by a metallic red painted strip.

All aboard for a sporting ambience and tribute to London.

The Union Jack-led colour concept is also employed extensively and to stylish effect inside the new edition of the MINI Rocketman Concept. The interior exudes a sporting ambience, while intricate details emphasise the car’s connection to London. The inner door panels and rear side sections are trimmed in dark blue nubuck leather, while the familiar MINI elliptical door rings provide an effective contrast with their white leather. The circular surrounds for features such as the air vents, door pulls and stereo speakers, are split into two sections and consist of a red inner ring and white outer ring.

The exposed carbon elements in the interior accentuate the MINI Rocketman Concept’s high-tech character and are incorporated into its colour scheme. For example, the blue paintwork used for the dashboard merges smoothly into black around the steering wheel, producing a harmonious flow of colour into the dark carbon surfaces. The most distinctive element of the dashboard is the cockpit surface, which is bordered by a red bar and has a striking 3D effect. Its relief structure depicts the name of every host city of the summer Olympic Games in the modern era using artistically intricate lettering, with London given particularly prominent billing.

The seat surfaces blend blue nubuck leather with an innovative textile fibre. The upper sections of the seats’ side bolsters, which provide additional support under dynamic cornering, are made from a rubberised material whose composition takes its cues – in terms of both style and function – from high-performance sports textiles and shoes. The seat belts also share the dark blue tone of the seat surfaces, while thin red and white strips add extra flourishes.

The new design of the MINI Rocketman Concept also displays its sporting spirit, Brit-chic style and eye for extravagant details through the range of sophisticated accessories for the interior. The stowage compartment on the centre console between the driver and front passenger symbolises a basketball court with miniature players. The key fob for the new concept car, meanwhile, comes in the form of a rocket decked out in British national colours. Other interior features include a rucksack attached behind the front passenger seat, which is made from the same rubberised material used for the seat bolsters and also sports the three-dimensional cockpit motif.

The new edition of the MINI Rocketman Concept cuts an unquestionably British and unmistakably MINI figure. Designed to welcome the athletes taking part in the “greatest sporting show on earth” to London this summer, the new edition of the concept car underlines the central role played by typically MINI customisation in every new product idea from the brand. The MINI Rocketman Concept also captures the imagination with its innovative technology, giving it all the ingredients it needs to lay on an irresistible combination of driving fun and sustainability. This, then, is further evidence of the brand’s extraordinary creativity in the design of solutions for urban mobility over the years ahead. 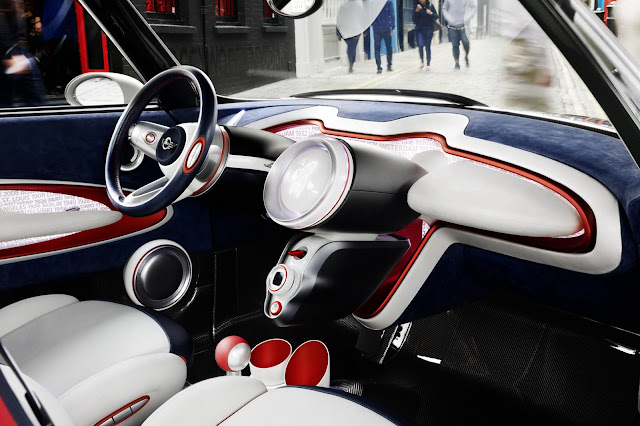 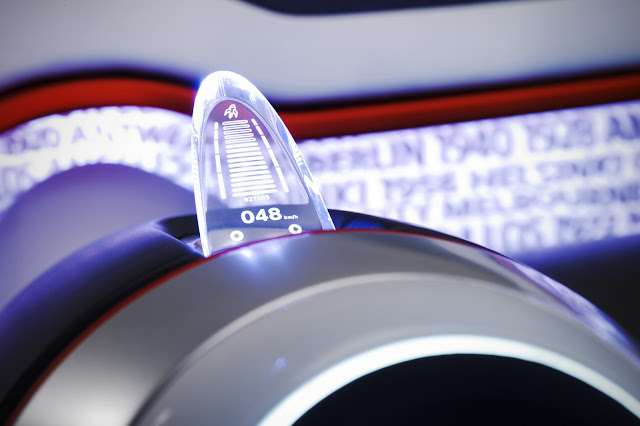 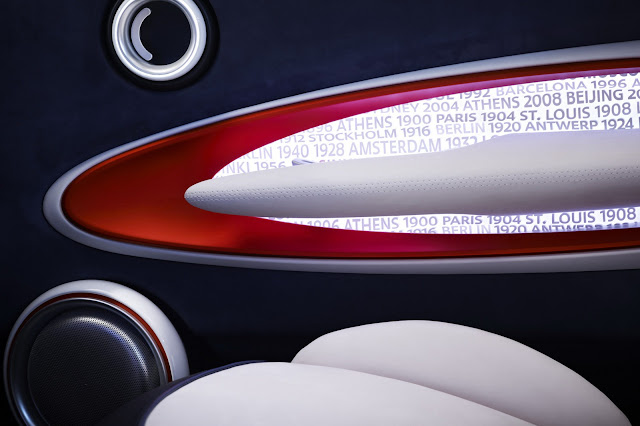 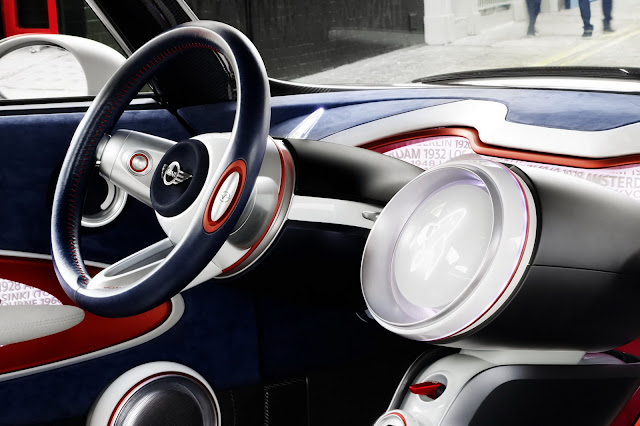 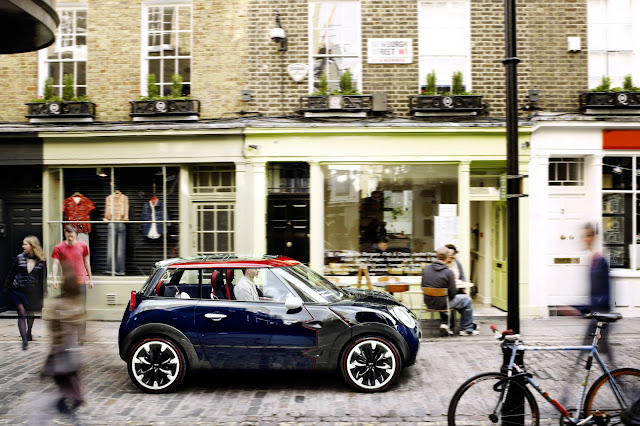 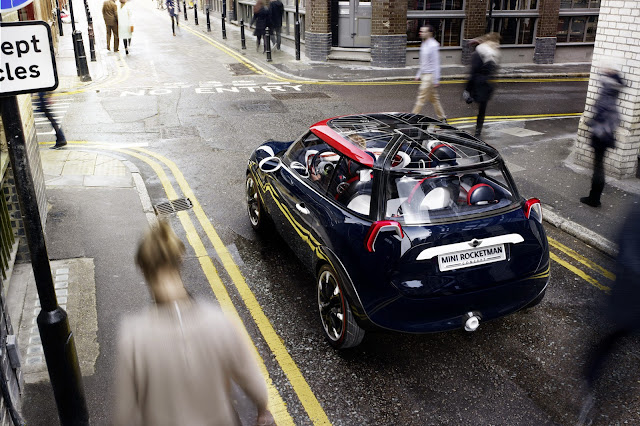 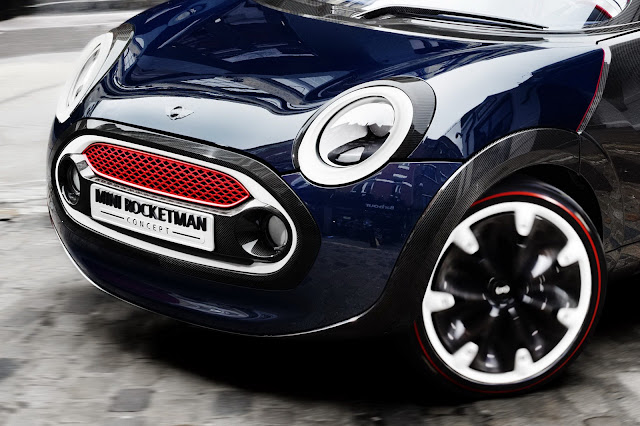 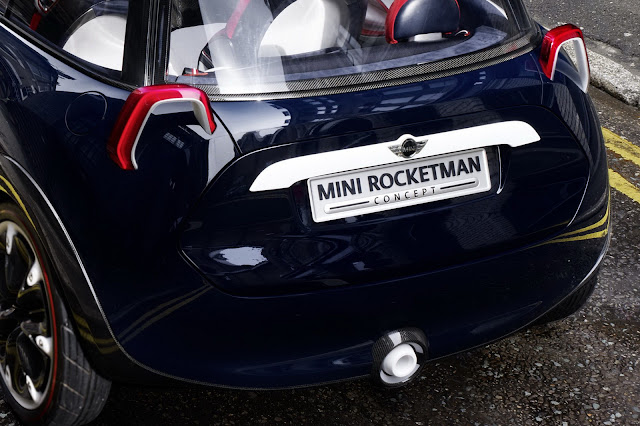 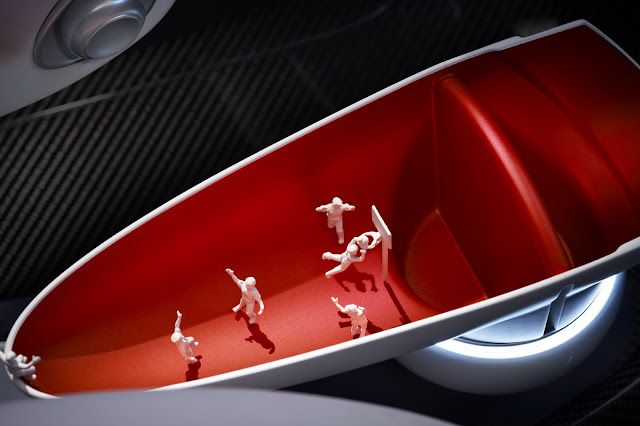 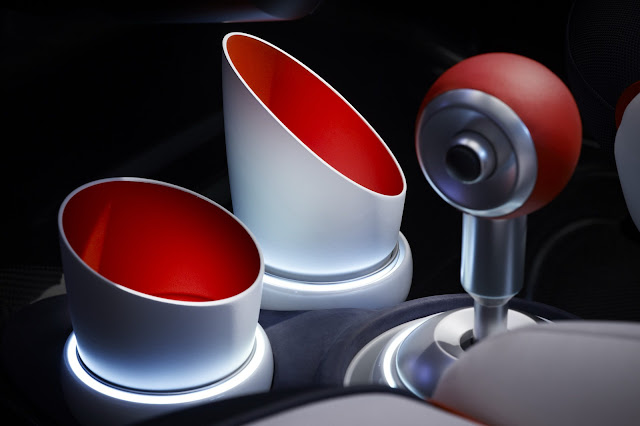 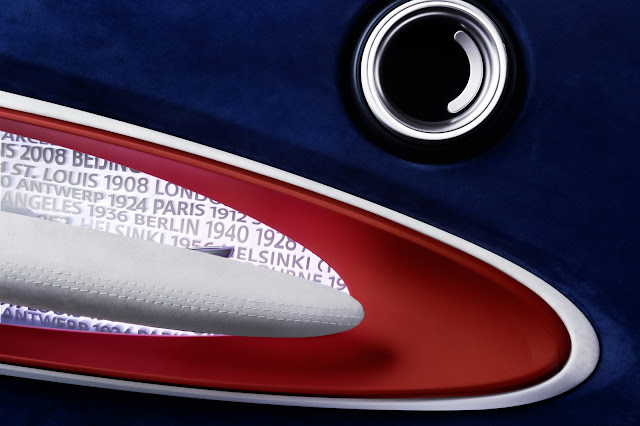