We are open for business, with strict precautions in place to protect our customers and staff 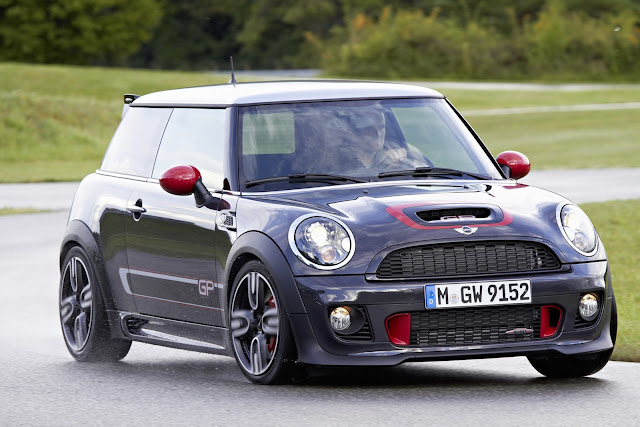 The standard-fitted high-traction sports tires offer awesome cornering grip, impeccable braking response and impressive performance. And to top it all off, with a DIN unladen weight of 1,160 kilograms, the MINI John Cooper Works GP is one of the lightest sports cars in its class.The balance between the engine, the suspension and the aerodynamics was fine-tuned during intensive testing on the Nürburgring North Loop (the old grand prix circuit), where the MINI John Cooper Works GP promptly clocked up a best lap time of 8:23 minutes – streets ahead of many big-name sports cars from higher segments. With its 0 to 100 km/h (62 mph) sprint time of 6.3 seconds and a top speed of 242 km/h (150 mph), the GP brings an authentic race car feel to everyday driving. 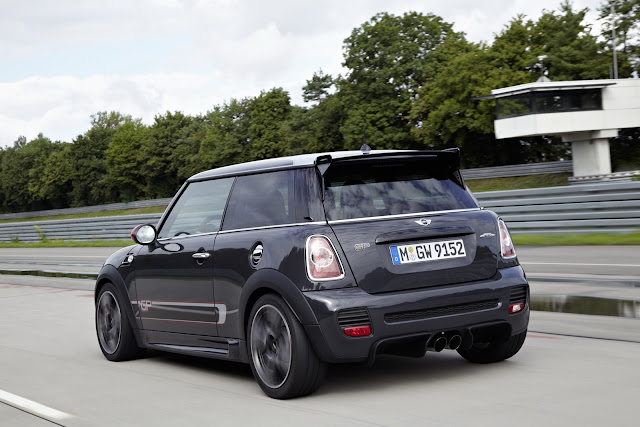 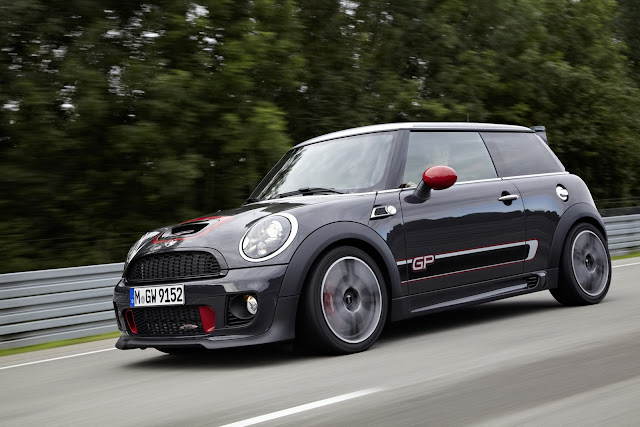 The MINI John Cooper Works GP is the latest incarnation of a racing heritage that dates back more than 50 years, to when the legendary sports car designer John Cooper developed a version of the classic Mini that was to become the ultimate fun-to-drive road machine. This car also carved out a highly successful career in motor sport, where it was three-times winner of the Monte Carlo Rally. The modern-day MINI has continued this tradition: the John Cooper Works products and models, with their close links to the British-built premium small car, continue to be a byword for top-class motor sport engineering. The most impressive incarnation to date of this shared passion for motor sport was the 2006 MINI Cooper S with John Cooper Works GP Tuning Kit. That model, too, was built in a limited edition of 2,000 units, and soon became a coveted collector’s item. 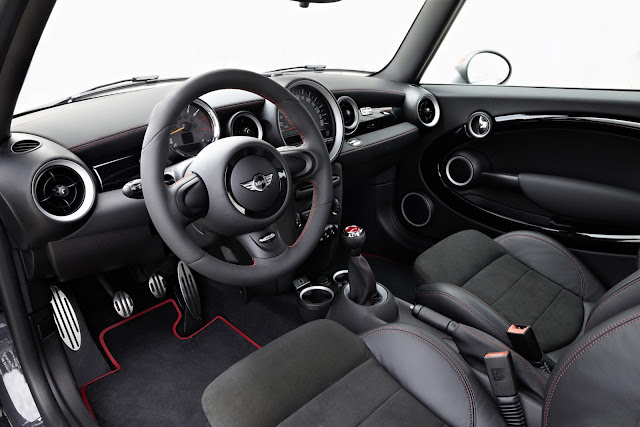 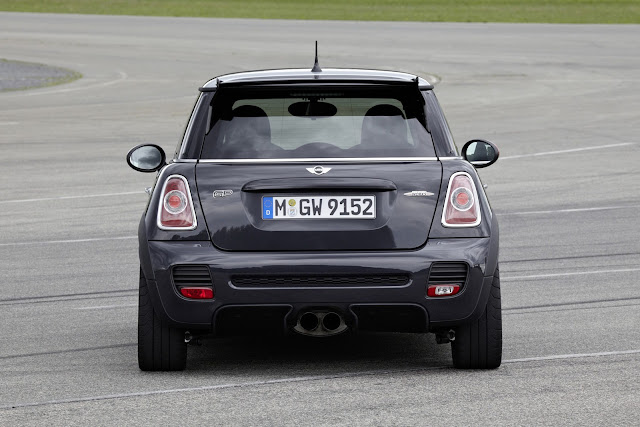 The MINI John Cooper Works GP is another stunning example of the time-tested principle of taking the natural sporty DNA of the MINI to a new level by combining it with a whole string of features taken straight from the race track. With this elite sporting machine, the John Cooper Works brand, now a sub-brand of MINI, has raised the stakes yet again – the new model has shaved a whole 18 seconds off its predecessor’s best lap time during testing on the Nürburgring North Loop. This new best time reflects continuous advances in engineering, which have been tuned to the highest performance standards by John Cooper Works. 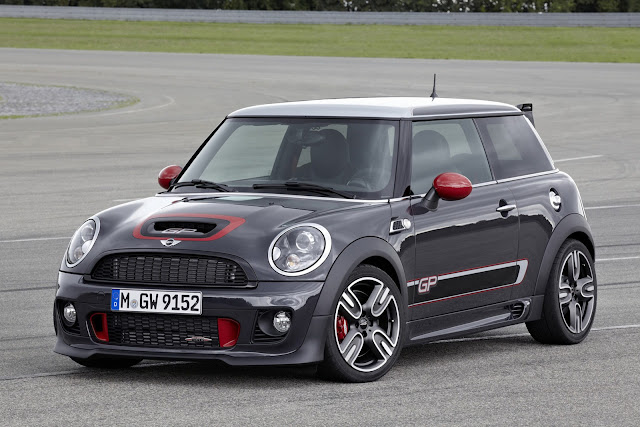 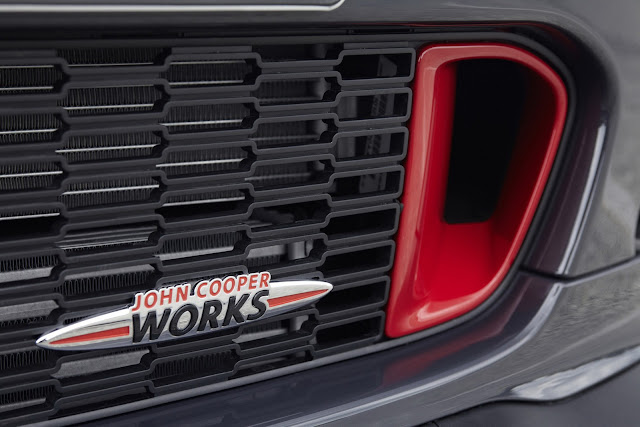 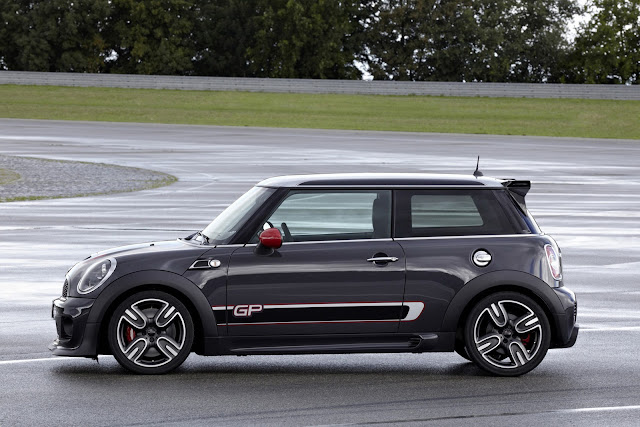 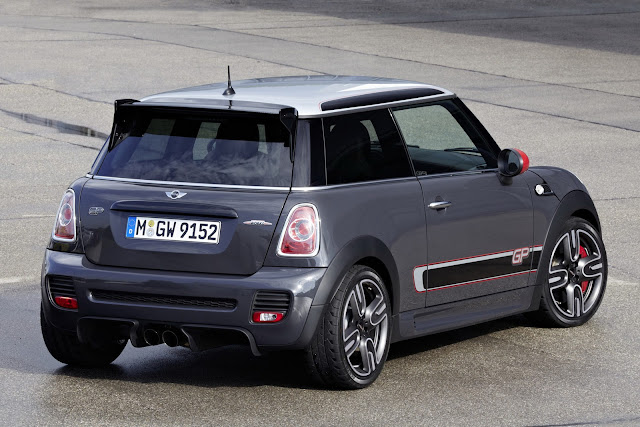 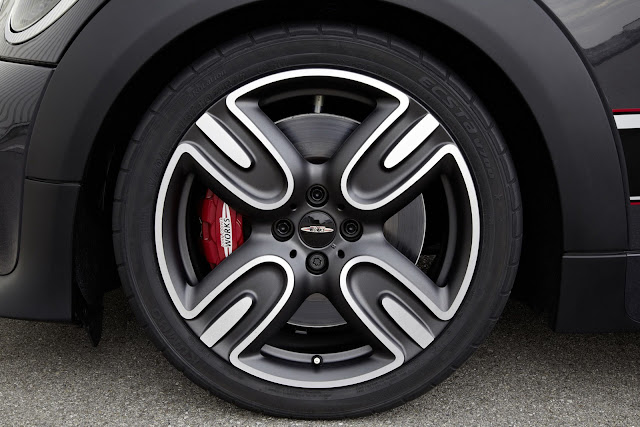 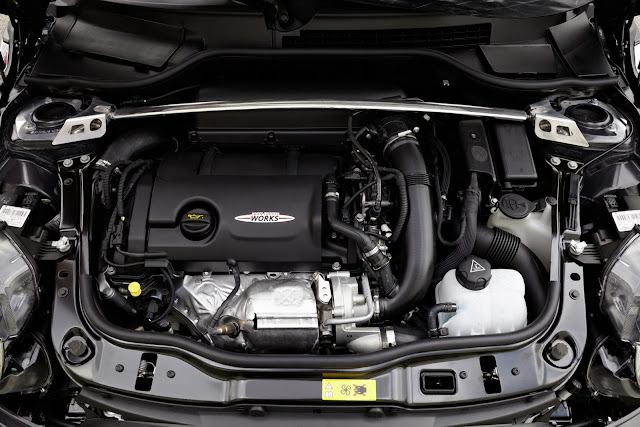 The state-of-the-art powerplant responds instantly to throttle commands and delivers maximum torque of 260 Newton metres from just 1,750 rpm. For extra punch when accelerating, peak torque can be increased for short periods to 280 Nm from 2,000 rpm, thanks to the overboost function. Maximum power of 160 kW/218 hp is delivered at 6,000 rpm. It is transferred to the wheels via a six-speed manual transmission, which is precisely matched to the performance characteristics of the engine. 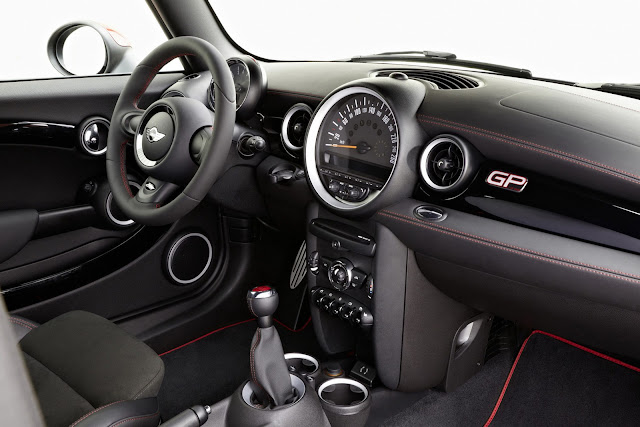 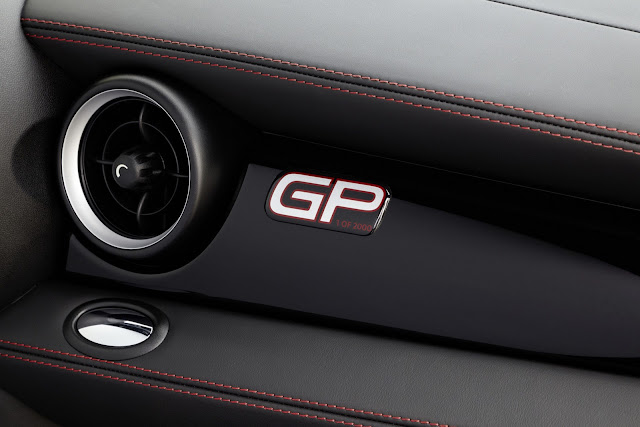 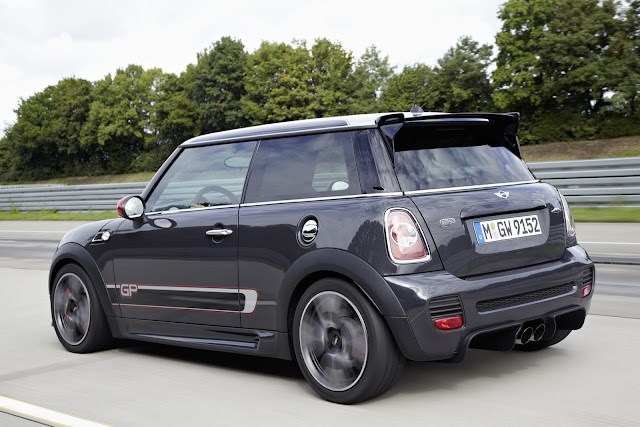 The astonishing torque gives the MINI John Cooper Works GP a 0 to 100 km/h (62 mph) time of 6.3 seconds. Mid-range acceleration is impressive too, with an 80 to 120 km/h (50–75 mph) time in fifth gear of just 5.9 seconds. Top speed is 242 km/h (150 mph). The turbocharged engine also delivers outstanding efficiency. This is further enhanced by MINIMALISM features which keep the average EU test cycle consumption of the MINI John Cooper Works GP down to 7.1 litres/100 km (39.8 mpg imp), corresponding to CO2 emissions of 165 grams per kilometre.

The MINI John Cooper Works GP’s exclusive suspension technology, too, relies heavily on motor sport. For the first time on a MINI, it features an individually adjustable coilover suspension, which allows ride height to be lowered by up to 20 millimetres. Among other things, this means the suspension set-up can be fine-tuned to different circuit conditions whenever the MINI goes out onto the track.

The front shock absorbers are mounted upside down in the tube, with the piston rod pointing down, in order to increase longitudinal and lateral stiffness.

The front camber has been increased compared with the regular MINI John Cooper Works, so that the performance potential of the sports tyres – which differ significantly from road tyres – can be used to full effect, without the penalties of early understeer, inevitably leading to increased tyre wear. Other features include reduced front-wheel toe-in and increased rear camber, which alters the forward weight transfer so as to give more speed and more neutral steering when driving close to the limit. At the same time, the reduced toe-in improves agility and cornering confidence. 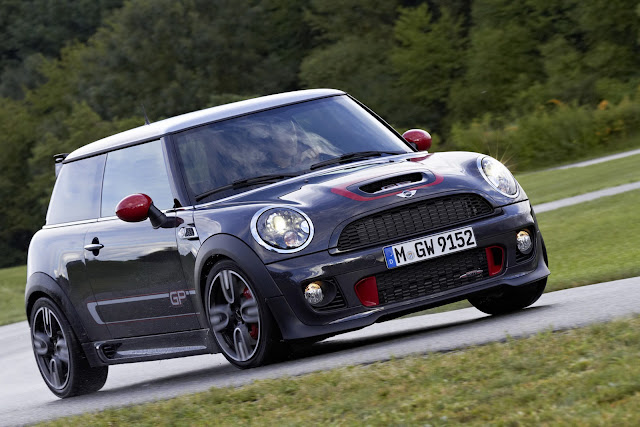 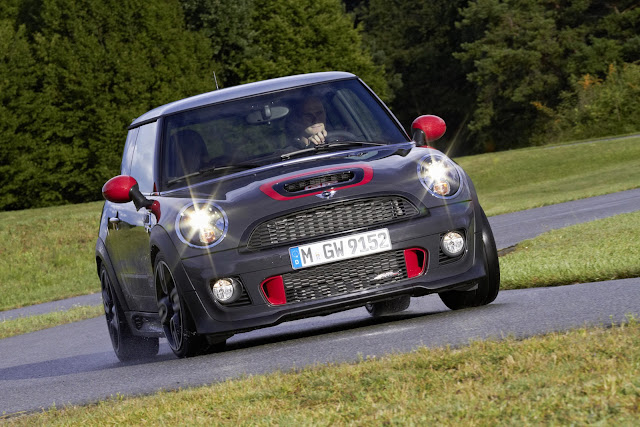 On the MINI John Cooper Works GP, the DSC Dynamic Stability Control is not combined with DTC, as would normally be the case, but with a special GP racing mode. Under hard driving, the driver may often not want ASC engine power reduction cutting in, so instead this system offers just ASC braking, based on the EDLC (Electronic Differential Lock Control) subfunction. The EDLC software brakes the wheel on the inside of the turn, and the drive power that would otherwise be lost at this wheel is redirected to the outer wheel, where the contact forces are greater.

With its conspicuous and distinctive appearance, the MINI John Cooper Works GP is upfront about its performance credentials right from the word go. The body is painted in the exclusive colour Thunder Grey metallic, with red for the edging round the bonnet opening as well as for the exterior mirror caps and the side air intakes in the front apron. John Cooper Works insignia appear on the lower air intake and the tailgate. The final proof of identity is provided by “GP”-badged side stripes running between the front and rear wheel arches. The standard specification of the MINI John Cooper Works GP includes xenon headlights in black shells, foglamps, sun protection glazing, air conditioning, DSC with special GP mode, and a Sport button. The aerodynamic body parts like the large front and rear aprons, striking side sills and model-specific roof spoiler not only add to the eye-catching appearance but also play an important part in controlling air flow. The rear diffusor, together with the underside panelling and the roof-edge spoiler, reduce lift forces at the rear axle by 90 per cent, for impeccable handling control even under high-speed cornering and when driving at or near the limit.

A six per cent reduction in drag is reflected in improved fuel economy and a higher top speed. The air flow round the front of the car has been significantly improved with the help of a large spoiler and full aerodynamic shielding of the engine compartment underside. This aerodynamic shield not only reduces drag and front axle lift, but also improves air flow through the engine compartment. Slits in the centre of the shield help to expel air from the intercooler. The slits are situated in an area of fast air flow and high vacuum force, so that the air is literally sucked out of the engine compartment, thereby improving the performance of the intercooler.

The exciting race car feel is raised a further notch by an interior ambience which, partly due to the absence of a rear seat bench, is focused entirely on the needs of the driver and “co-driver”, both of whom can savour the performance of the MINI John Cooper Works GP to the full thanks to Recaro sports seats with special GP stitching. A cargo guard prevents items from sliding forward out of the luggage compartment in sporty driving situations. The John Cooper Works thick-rimmed leather steering wheel and the gearshift knob with chrome ring and red shift diagram help give the driver a more direct feel for the car. Finally, with features like the anthracite roof liner, the piano black interior surfaces and door grips, and the anthracite rev counter and speedometer dials, this interior also helps to improve the driver’s concentration and focus on the road. 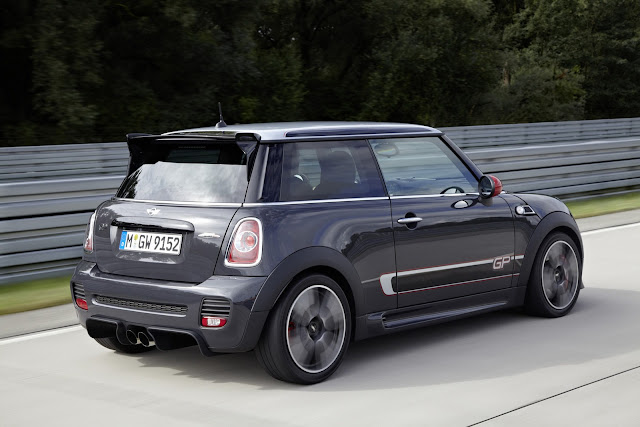 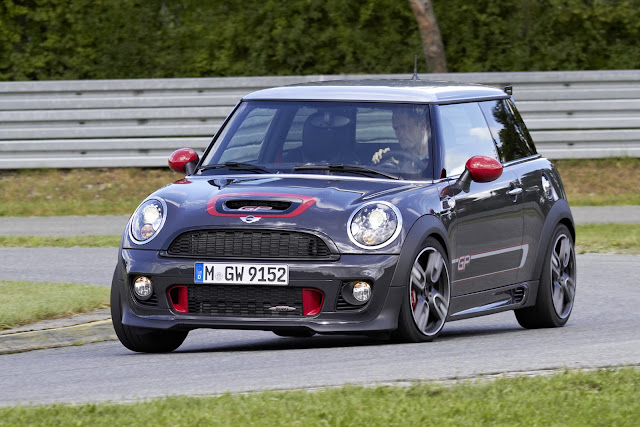