F26 Apr 17th, 2013
Press Release – Every BMW SAV has been a trailblazer. The world premiere of the first BMW SAV (the BMW X5) in 1999 saw the BMW Group create the Sports Activity Vehicle (SAV) segment – one in which BMW SAVs remain the market leaders. The BMW X3 and BMW X1 were likewise the first SAVs in their classes, and continue to define these types of vehicles today. (Full Press Release + Wallpaper Gallery inside) 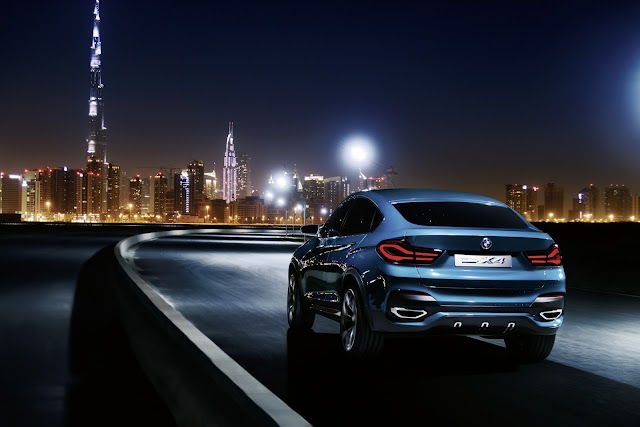 The story of BMW light trucks took on a new dimension in May 2008 with the introduction of the BMW X6 – the first Sports Activity Coupe (SAC). This unique concept brought together the rugged looks of a BMW SAV with the emotional aura and sporting character of a BMW Coupe for the first time. The enduring popularity of BMW’s first SAC is borne out by its consistently high sales figures. The short history of the BMW X range is already a successful one. Since the first BMW SAV took to the stage, average sales across the BMW X line-up have progressed on a constant upward curve: one in four new BMW cars is now a BMW SAV. 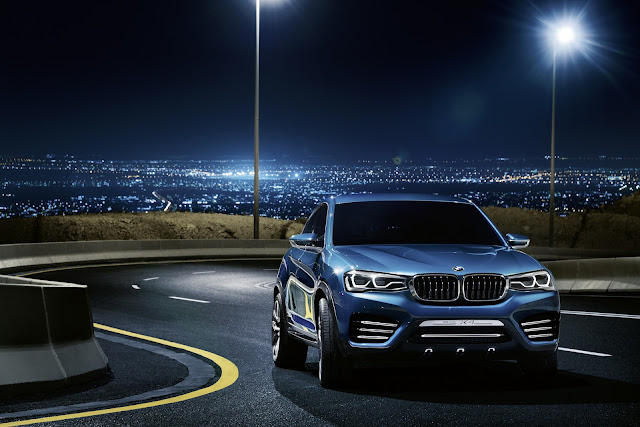 With the BMW Concept X4, the BMW Group offers a preview of the future of the BMW X family. It takes no more than a first glance to see how smoothly the qualities of a BMW SAV can blend with the genes of a BMW Coupe. The new Sports Activity Coupe concept from BMW is poised to continue the success story of the BMW X6 in a new vehicle class. Eye- catching proportions, tight contours and numerous high-quality details produce an unrivalled product character brimming with emotional appeal, dynamism and the sturdiness you would expect from a BMW SAV, while at the same time holding out the promise of out-standing performance and driving dynamics. All of this can be experienced when the BMW X4 production model rolls out of the factory for its market launch, scheduled for 2014. The second Sporty Activity Coupe in the brand ́s model range will be built at BMW Plant Spartanburg in the USA, the competence center for BMW SAVs which also produces the BMW X5, BMW X6 and BMW X3.

The sporting character of the BMW Concept X4 is articulated by its dynamic line work as well as its proportions. With a body length of 183 inches (4,648 mm), a width of 75.4 inches (1,915 mm) and a height of 63.9 inches (1,622 mm), its exterior dimensions signal sporting elegance and powerful robustness. In addition to a long bonnet, short overhangs and set back passenger cell, its signature BMW features include a wheelbase measuring 110.6 inches (2,810 mm), while 21 inch light alloy wheels lend an added flourish to the athletic bearing of this Sports Activity Coupe.

A face with an urban sporting presence.
The front-end styling of the BMW Concept X4 exudes hallmark BMW dynamics and the rugged purpose and presence of a BMW SAV in equal measure. Classic BMW features such as the kidney grille and stylized twin circular head-lights give the nose a clear identity and ensure it shines out as a BMW the first time you set eyes on it. The BMW Concept X4 lavishes both these front end design icons with meticulous detail and three-dimensional depth. The large kidney grille stretches out within a solid looking surround. The high gloss frame is open to the sides and at its lower extreme, lending it an almost “floating” appearance in the center of the nose. The grille features prominently sculptured bars with ultra-stylish detailing. The hollowed out, high-gloss black bars have a milled lower third with a matt finishing, which lends the kidney structure extra visual depth. And the grille also comprises additional air apertures to ensure an increased supply of cooling air to the engine.

The kidney grille is flanked by dynamically contoured full LED headlights. Inside the light units, a flowing, hexagonal interpretation of the familiar BMW twin circular appearance points to an unwavering focus on the road ahead. The horizontal continuation of the inner light elements creates a visual connection with the grille, accentuating once again the width of the nose.

This dynamic impression extends to the front apron. In keeping with BMW Coupe tradition, the side air intakes are larger than the inner horizontal bars and make a visual feature of the increased cooling air requirement, while satisfying that need. Together with the car’s wide track and low center of gravity, the in-takes represent a promise of exceptional performance capability. The side air intakes pick up on a stylistic theme from the kidney grille; their black horizontal bars are, like the grille’s, partly milled out but boast gleaming chrome edges. It all makes for an enticing contrast of materials, a fusion of high-end quality with the characteristic robustness of BMW X vehicles. This design theme concludes in the underside protection element, where three milled out, gleaming chrome elements present a high-quality take on the modern preference for minimalist solidity.

Side view with an extrovert edge.
The qualities of a BMW SAV merge with the values of a BMW Coupe in the muscular silhouette of the BMW Concept X4. Its proportions present a persuasive case for the BMW Concept X4 as the most dynamic vehicle in its segment. In hallmark BMW style, a longer wheelbase, relatively long bonnet, short over-hangs and a set-back greenhouse lend the car an undeniable dynamism even when standing still. The striking interplay of surfaces creates a vibrant contrast of light and shadow that exudes a feeling of agility and power. Prominently rising lines mould the flanks into a wedge shape and give the car as a whole a forward- surging momentum.

The coupe style roofline sweeps elegantly downwards and makes the car appear longer. Below, the windows extend well to the rear, where they are bordered by a dynamic interpretation of BMW’s signature Hofmeister kink. The stretched and shallow band of glass creates a persuasively dynamic link between the greenhouse and vehicle body, the slim glass surface giving the body an impressively powerful appearance. At the same time the visual center of gravity is lowered, underlining the sporting mission statement summed up by the car’s flanks.

The BMW Concept X4’s contours include a new interpretation of the familiar BMW swage line, a pair of dynamic lines defining the eye-catching impact of the side view. A concave area under each swage line lends the flanks an almost sculptural expression – at once robust and dynamic. The surface volumes and definition of the contours deepen as they extend towards the tail and imbue the rear end with added stature. Here, the powerfully flared wheel arches team up with the concave surface below the rear swage line to visualize the power rippling through the rear wheels. The radiant exterior paint shade Long Beach Blue is a perfect match for the elaborately structured volumes and contours, and brings particular depth to the expressive design language.

Fitting the BMW X template, the wheel arches of the BMW Concept X4 are large and almost square in design. This prominent emphasis on the wheels draws further attention to the car’s planted stance and long wheelbase, while at the same time providing a visual showcase for the xDrive intelligent all-wheel-drive system. The pared back, matt black protective cladding provides the final element of bodywork before the BMW Concept X4 meets the road. 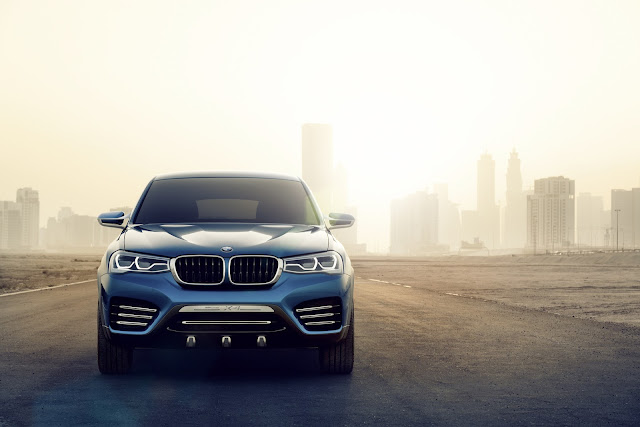 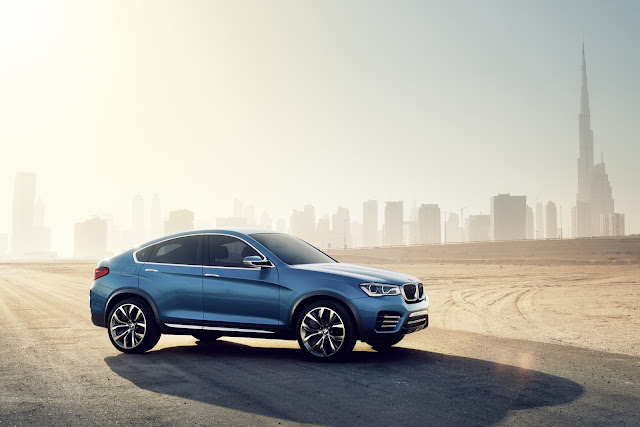 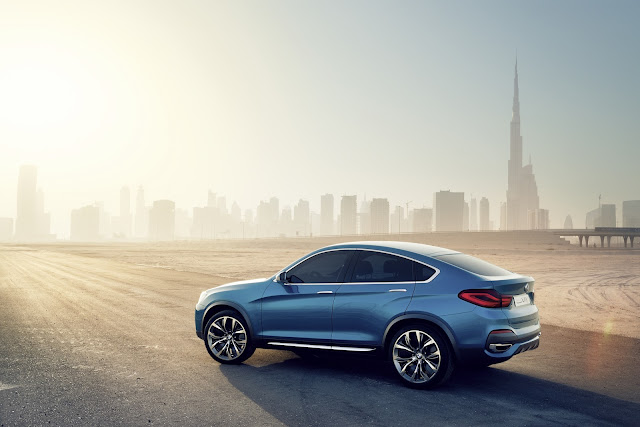 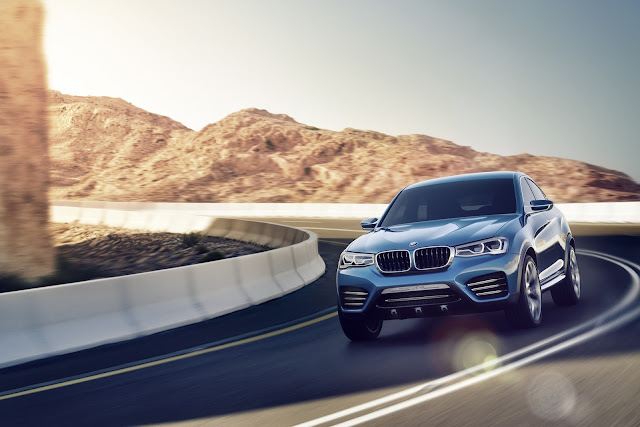 Expressive 21 inch bi-color light alloy wheels round off the car’s appearance when viewed from the side. Intricate, high-gloss polished spokes provide visual allure, while behind them dark-colored flame surfaces contribute an impressive feeling of depth.

Cutting-edge presence for the rear.
The rear of the BMW Concept X4 takes the sporting, width-accentuating elements of the front-end design and reproduces them with an emphatically horizontal flavor. The body’s lines and the slim LED tail lights positioned at the outer edges of the rear emphasize the muscular wheel arches and wide track. Below, horizontal lines split the rear visually into sections, while light surfaces re-duce the car’s visual height and underline its width.
The shallow rear window gives the vehicle body an even more powerful impression and its broad shoulders a show-stealing presence. Looking further down, the L-shaped rear lights of the BMW Concept X4 underscore its consummate stance on the road. A full-sized inner element in the tail lights, meanwhile, replicates the signature BMW “L” shape in three- dimensional form and with impressive depth. 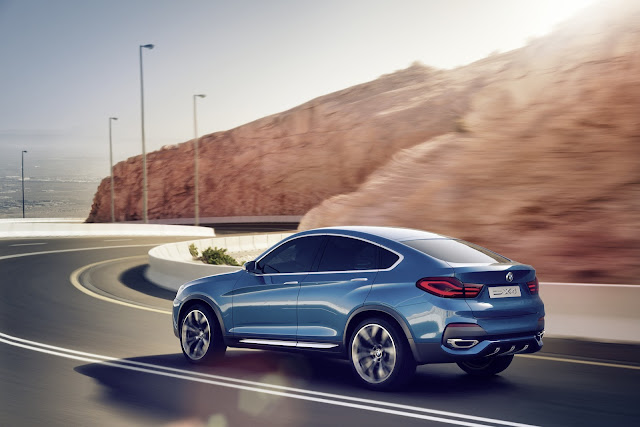 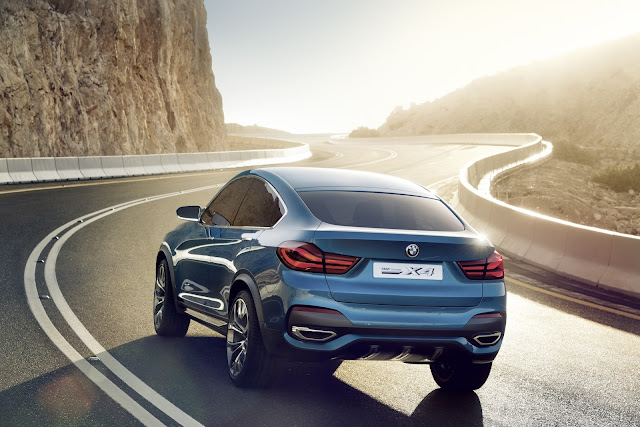 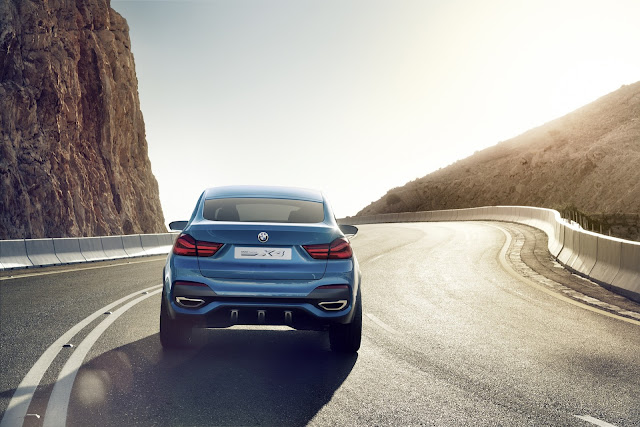 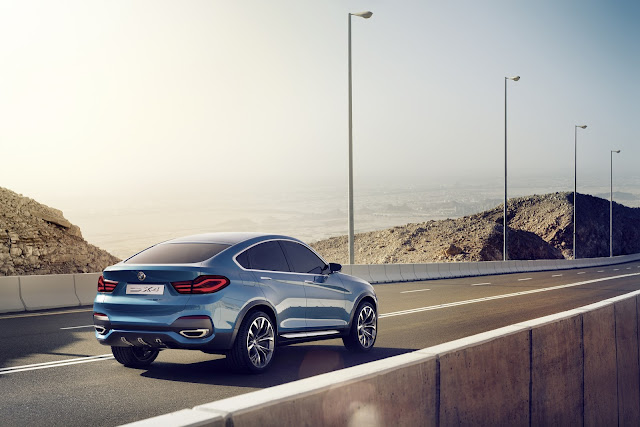 The most striking element at the back of the car is the rear apron, which provides a wide, full length interpretation of the front apron’s large outer air intakes. The apron’s cut out picks up the two exhaust tailpipes in a dynamic sweep before diverting the gaze to the wheels. Body color elements reaching well down towards the road surface provide a high quality border for the rear end and re emphasize the road focused proposition of the BMW Concept X4.

The underside protection acts as the body’s lowest edge. Matte black surfaces lower the car’s perceived height and accentuate the robust BMW X character of the rear. As at the front of the car, three milled elements in gleaming chrome add a sophisticated touch to the underside protection. 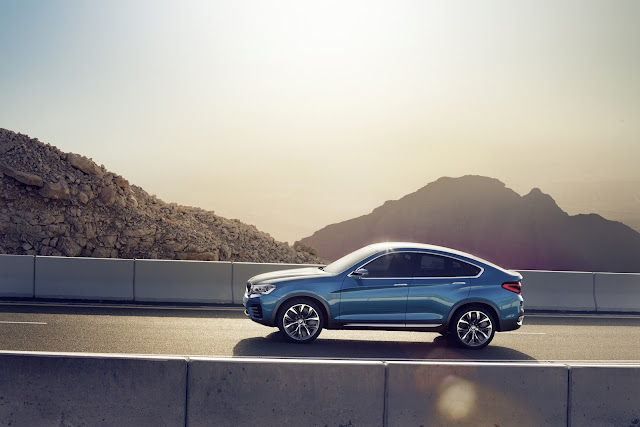 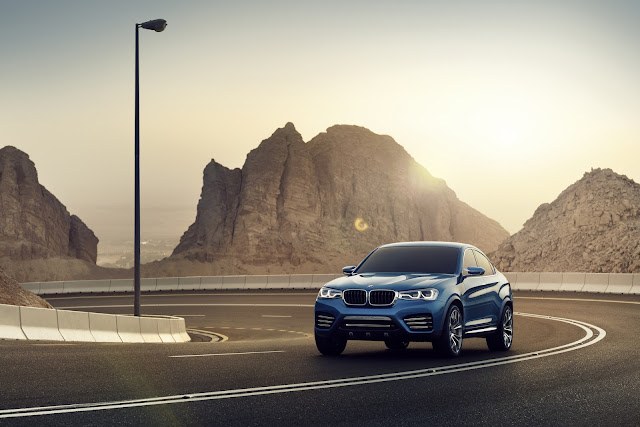 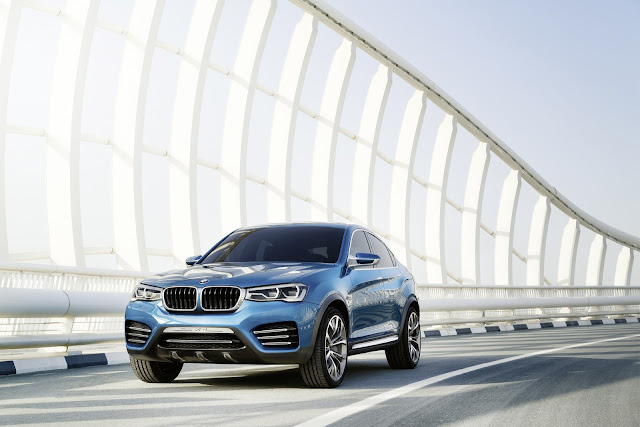 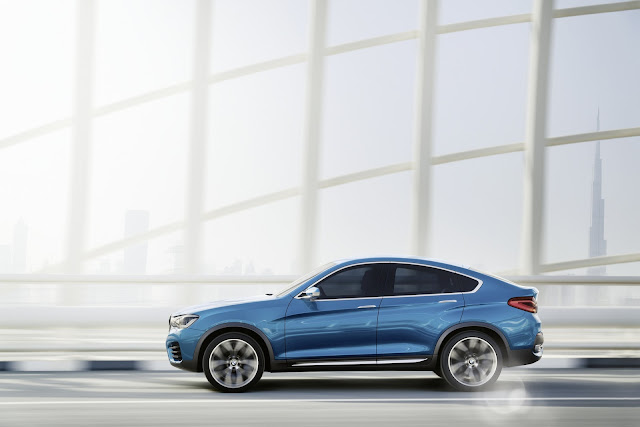 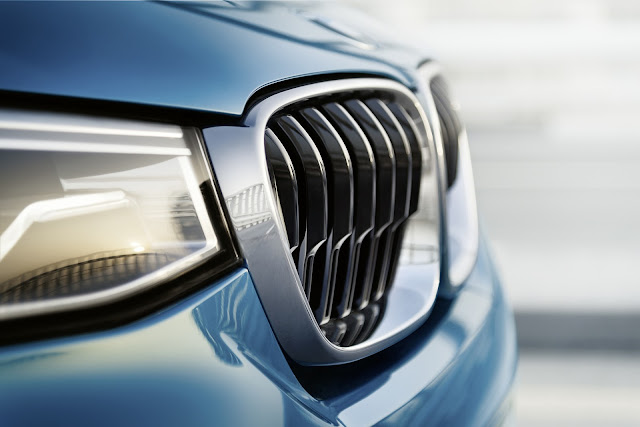