Concepts May 24th, 2013
(Read More for Fully Gallery and Video Presentation) Press Release – BMW and Pininfarina are two of the most tradition-swathed names in the motoring world. Each is a byword for cutting-edge technology, style, dynamics and aesthetics. With the BMW Pininfarina Gran Lusso Coupé, the two time-honoured companies are unveiling the outcome of their first collaboration at the Concorso d’Eleganza Villa d’Este 2013. The BMW Pininfarina Gran Lusso Coupé is a one-off and represents the exclusive interpretation of a luxurious BMW Coupé as seen through the eyes of Pininfarina. Working in close consultation, the two design teams have created a new automotive persona brimming with character and ready to join the high-end luxury class – typically BMW while sporting the distinctive signature of Pininfarina. 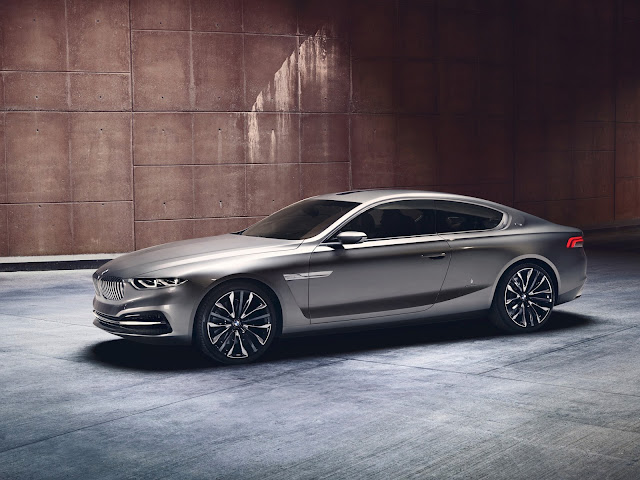 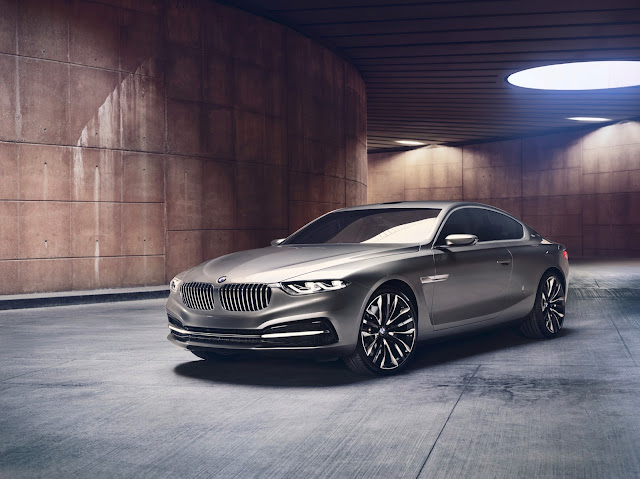 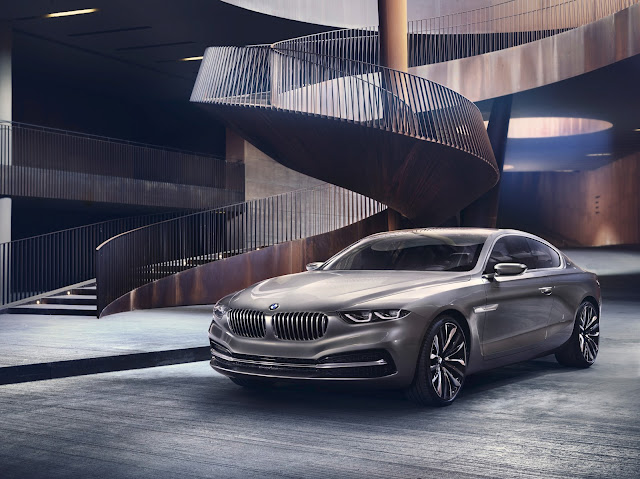 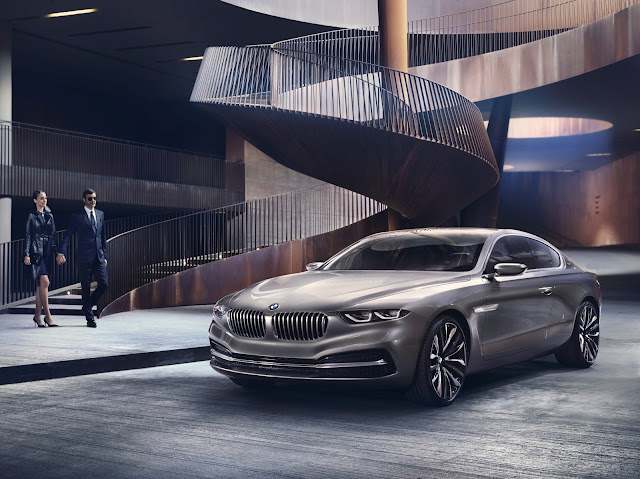 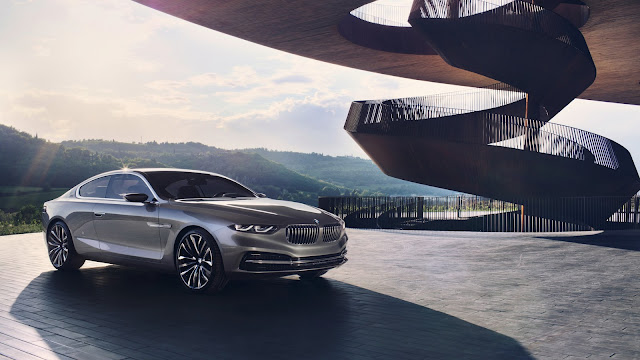 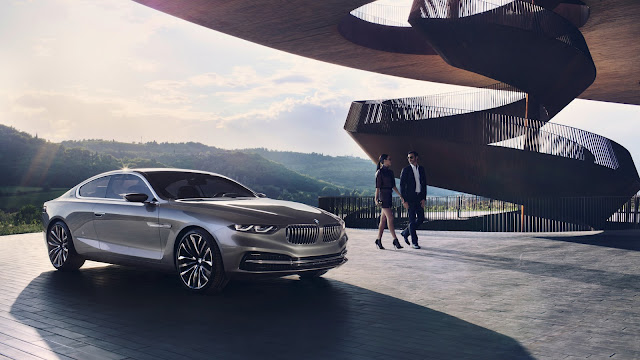 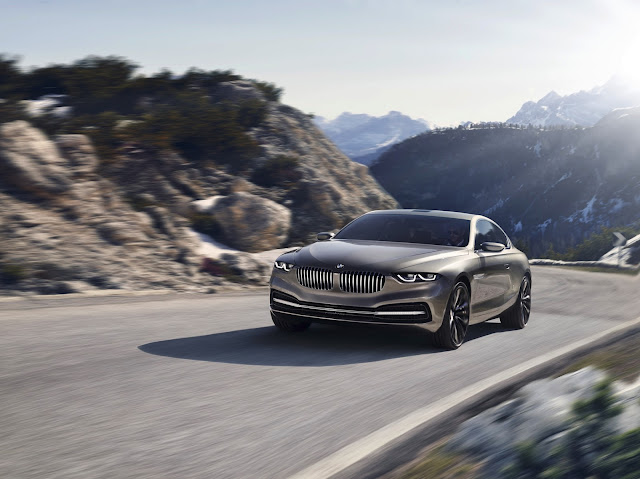 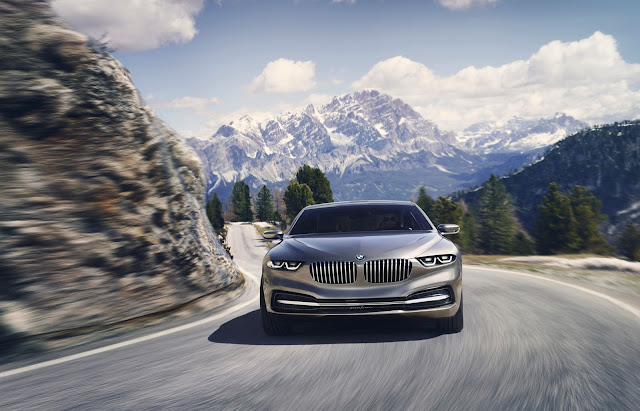 With the BMW Pininfarina Gran Lusso Coupé, the BMW Design team took up exclusive design aspects such as luxury and elegance and fed them into a creative exchange with long-established specialist car designer and manufacturer Pininfarina. In this elaborately created one-off, the renowned companies BMW Group and Pininfarina joined forces to bring an idea to fruition: “The appeal of this collaboration with Pininfarina is that you get another, very different and special angle on facets like luxury and exclusivity,” notes Karim Habib, Head of BMW Design. “The Italian company, after all, has always been a byword for these criteria in particular, demonstrating time and again its keen sensitivity and exceptional finesse in these areas. In Pininfarina we have found the ideal partner to lend shape to this vehicle concept.”

“The result of this cooperative venture is far greater than the sum of its parts,” says Fabio Filippini, Head of Design at Pininfarina. “When two such tradition-rich and experienced brands join forces to turn a vision into reality, something utterly new and exciting emerges. From start to finish, this project was defined by a mutual respect for the identity of the other company.” 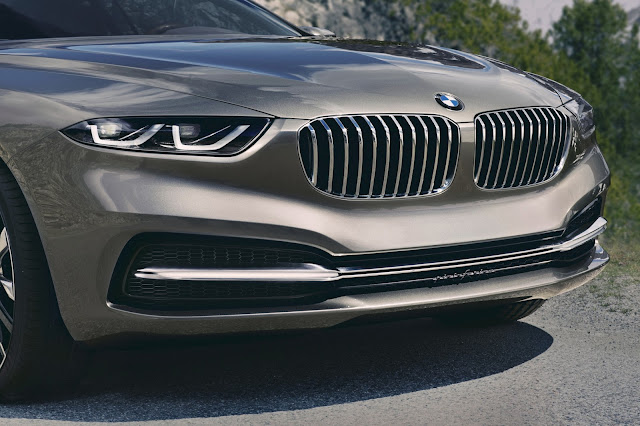 Consummate elegance.
The BMW Pininfarina Gran Lusso Coupé adds a new dimension to the BMW claim to exclusivity. This painstakingly created one-off captivates the viewer at first glance. Liberal surface areas and taut contours are the distinguishing elements of an elegant car body. Typical BMW proportions – a long wheelbase, stretched bonnet and set-back greenhouse – imbue the BMW Pininfarina Gran Lusso Coupé with imposing dynamics even when stationary. At the same time the car exudes balance and harmony: BMW values such as technology, dynamics and precision are complemented by the skilled craftsmanship of Pininfarina to create a very special holistic experience. “The BMW Pininfarina Gran Lusso Coupé has an extraordinary impact. It expresses hallmark BMW values such as luxury and sheer presence in a highly elegant form,” says Adrian van Hooydonk, Senior Vice President BMW Group Design. “I admire the reductive clarity and precision in Pininfarina’s design. Their expectations for the end result have been just as high as ours, and their understanding of design perfectly complements the BMW design DNA for a vehicle of this kind.”

Dynamic presence – the front view.
With its broad, wheel-focused stance, the front of the BMW Pininfarina Gran Lusso Coupé radiates sheer presence and dynamics. The hallmark double- kidney grille and the road-focused headlights with their suggested twin circular look reveal at a glance the family bond with BMW. At the same time the distinctive Pininfarina elements have been interpreted with Italian finesse to lend the front end a special flair.

The trademark BMW kidney grille forms the central element of the front-end design, and all surfaces and lines take their bearings from it. It symbolically points to the engine at the heart of the vehicle, its size reflecting the power of the V12 unit nestling behind it. The “kidneys” are angled towards the road, citing the typical BMW “shark nose” and lending the front end an even more dynamic look, particularly when seen from the side. Viewed up close it discloses highly accomplished detail work: the front part of the bipartite kidney grille is made of matt-sheen aluminium, while behind it an identically shaped part in high-gloss black adds visual depth and makes for an exciting contrast of materials.

Above the kidney grille the bonnet stretches across the front of the car, its subtle contours appearing to emanate from the BMW emblem and lending the bonnet a dynamic elegance. The flat headlights underline the road-focused look associated with a BMW and round off the “face” of the BMW Pininfarina Gran Lusso Coupé. Their dynamic contours are in perfect harmony with the classic BMW twin circular look in an interpretation that leaves them open at the top. The use of LED technology creates a technically premium impression while adding a striking depth to the headlights.

The eye-catchingly sporty front apron concludes the front end of the BMW Pininfarina Gran Lusso Coupé as it dips towards the road. The flat, one- piece air intake accentuates the breadth of the front, an impression reinforced by chrome trim that adds a classy touch. The air intake is larger at the wheels and draws attention to the car’s wide, sporty track. Just above the road surface, discreet Pininfarina lettering points to the contributing partner from Italy, like a signature on a work of art. 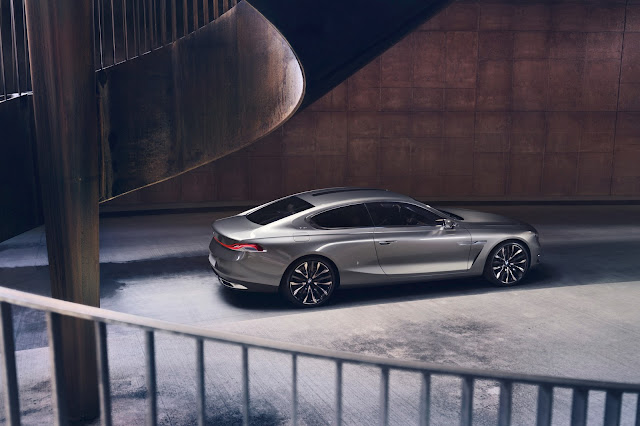 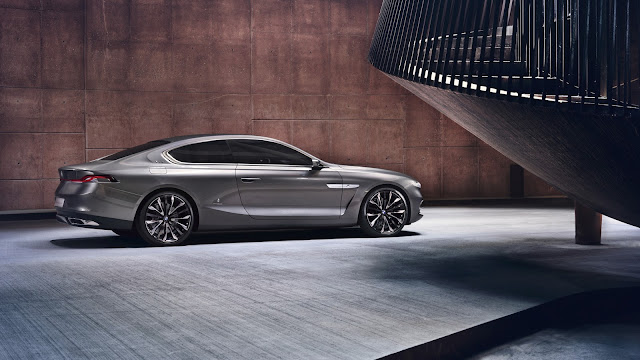 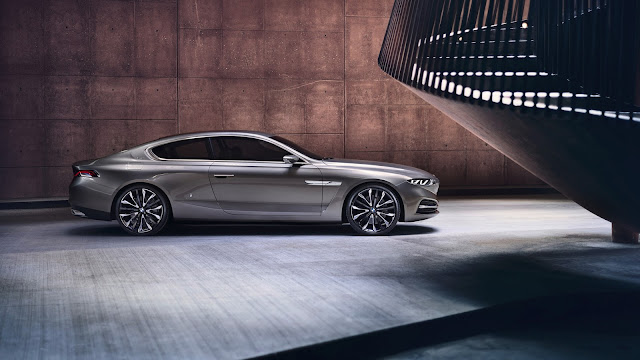 Elegant sculpture – the side view.
The designers at BMW and Pininfarina set particular store by creating the right proportions. The car’s surfaces display the elaborate form language of BMW while being sculpted with a clarity that is hallmark Pininfarina. Within a powerfully present silhouette, convex taperings on the side add a dynamic elegance and give the body a tautly athletic shape.

At the same time the reduced, precise contours stretch the vehicle and underline its exclusivity with a contemporary touch. The high shoulder line extends almost horizontally along the entire side of the car, imbuing the BMW Pininfarina Gran Lusso Coupé with stature and presence. Above it the long roof line flows elegantly into the rear to define the short tail end. Below the shoulder line, a striking countersweep to the roof line emanates from the Air Breather behind the front wheel. Ascending towards the rear, it lends the back section of the car a light and dynamic appearance. All the lines have been designed with keen sensitivity: as they trace their course they become stronger or weaker and, through the changing play of light and shadow, show off the surrounding surfaces to their best effect.

Numerous details accentuate the elegance of the side view. The matt-sheen embellishment behind the front wheel adds a stylish accent as it integrates the side indicator. Another signature BMW detail is the Hofmeister kink – the eye- catching forward bend in the window graphic that is perfectly integrated into the surrounding play of lines. Behind it the V12 logo indicates the powerful engine within the BMW Pininfarina Gran Lusso Coupé. Pininfarina lettering in the side panel points to the definitive role played by the Italian design company in creating this vehicle, with the Pininfarina logo above it indicating that the BMW Pininfarina Gran Lusso Coupé was also built by Pininfarina.

The exclusively designed 21-inch wheels perfectly augment the sporty, elegant statement made by the BMW Pininfarina Gran Lusso Coupé. Five trios of graceful yet powerfully sculpted spokes display a strong visual depth through the application of matt-sheen aluminium, black and black chrome. As such the wheel design blends an elegant multi-spoke style with the sportiness of five-spoke rims. 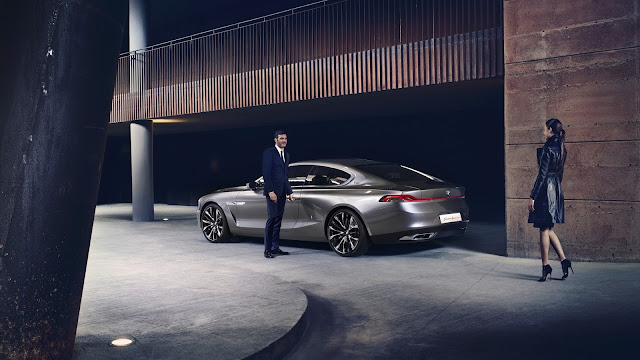 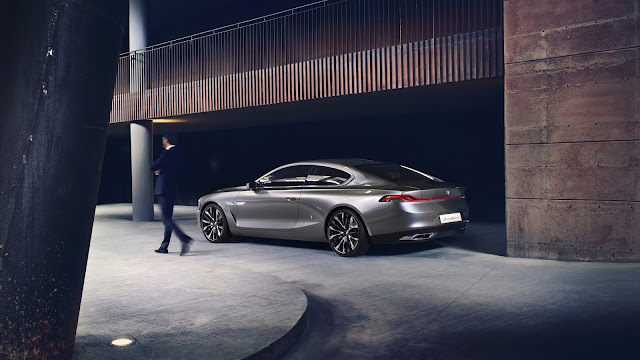 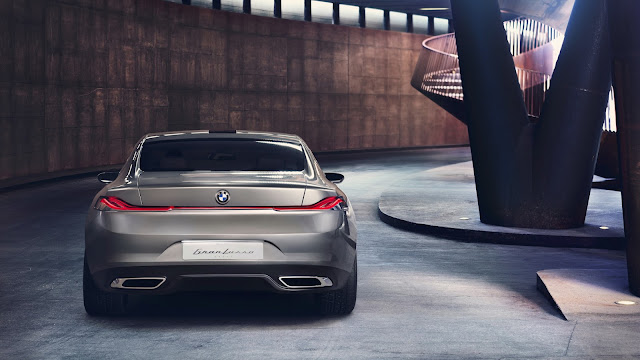 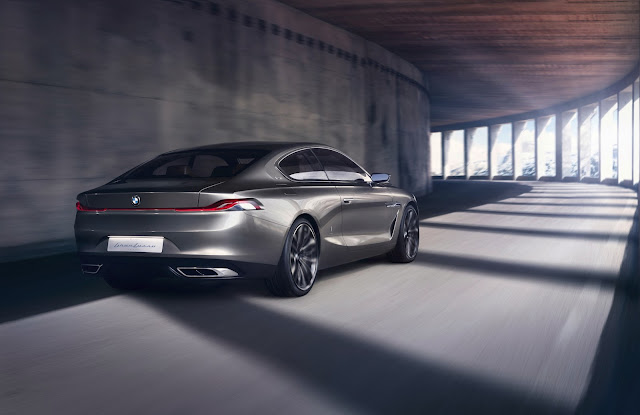 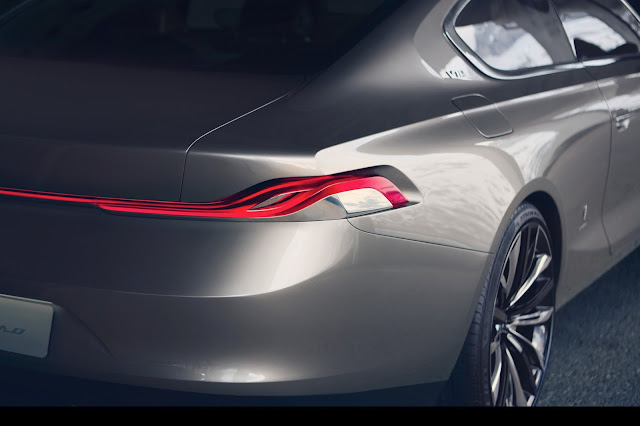 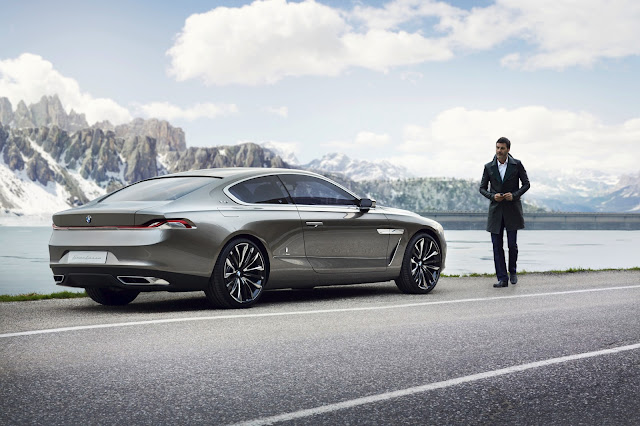 Sophisticated stance – the rear view.
The elongated side profile leads to a slender and elegant tail end. Striking horizontal elements imbue the entire rear end with a very broad, flat impression. At the same time, the generous surface design of the rear lends it a powerful presence. Between the surfaces, precise contours and horizontal lines break up the rear aspect, resulting in a clever interplay of light and shadow that partitions the entire design and brings it alive. An eye-catching detail is the transition from the roof to the rear lid: two elaborately shaped struts extend the roof pillar towards the rear, ensuring an elegantly fluid transition of the roof line into the tail section.

Extending from the sides, the tail lights embrace the rear end in a single sweeping gesture that brings the side and rear together visually. The tail lights reveal elaborately detailed workmanship and lend the BMW L-shape a slender, almost filigree interpretation. They are set – jewel-like – within high-grade trim in matt-sheen aluminium. A particular highlight is their open design, allowing air to flow through them. 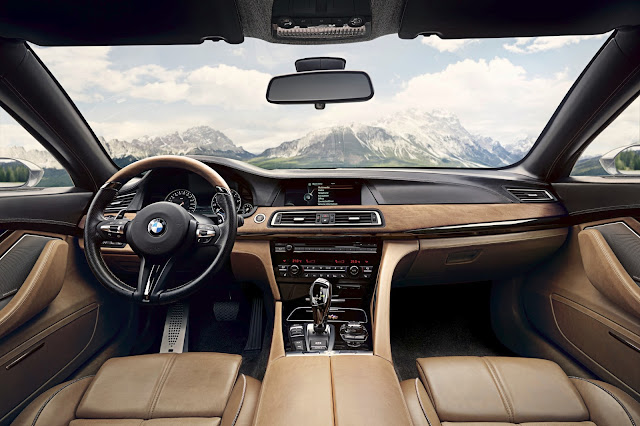 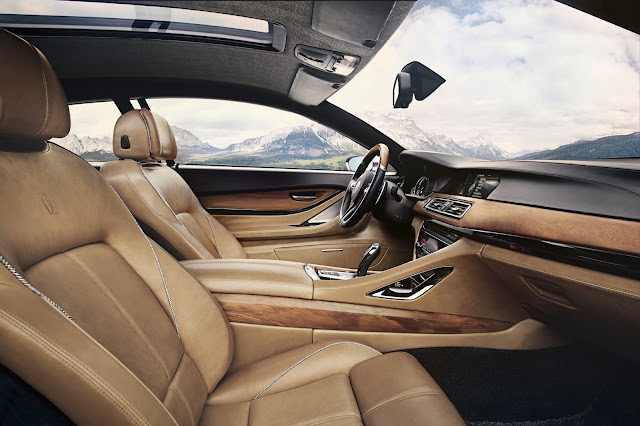 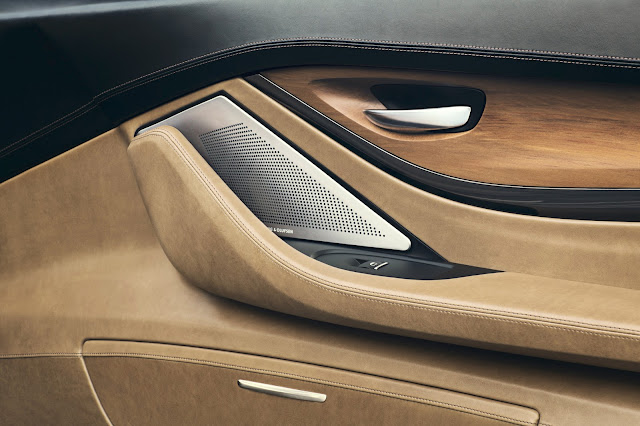 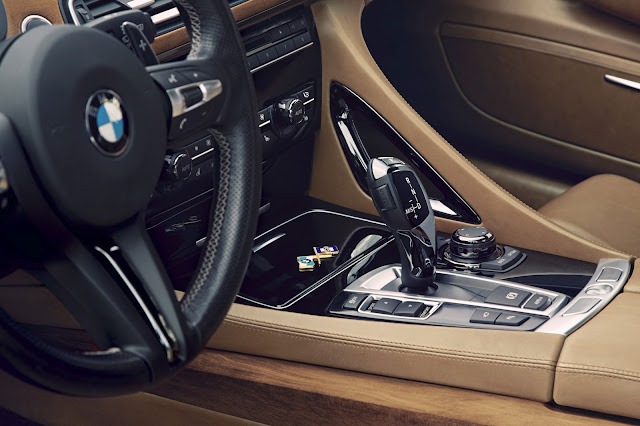 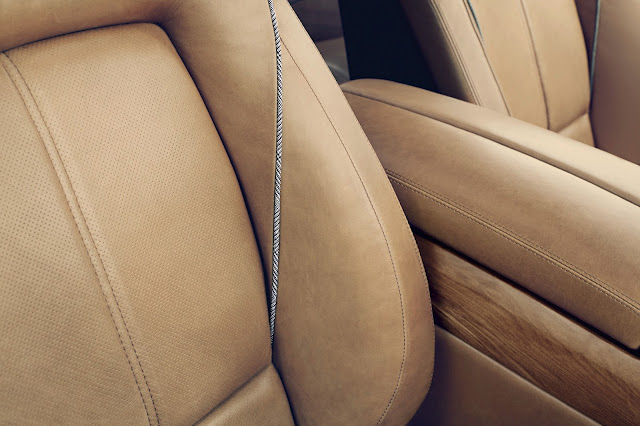 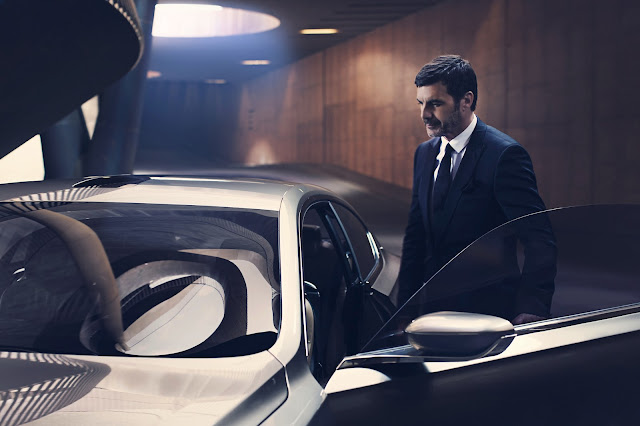 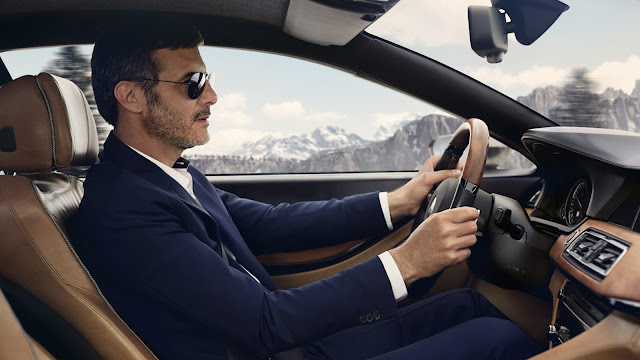 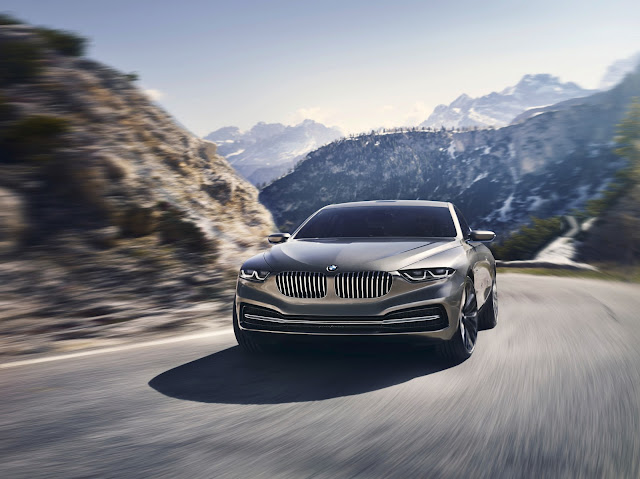 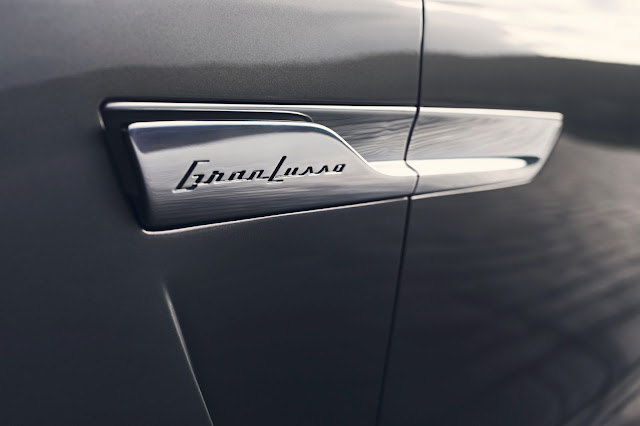 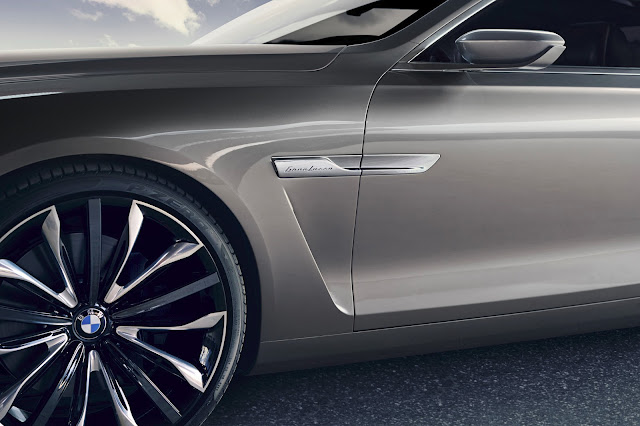 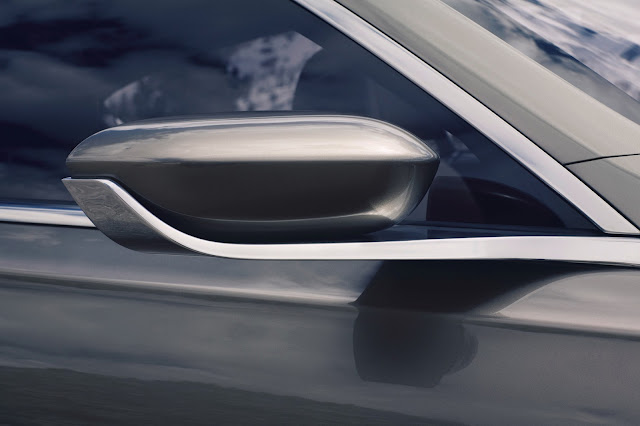 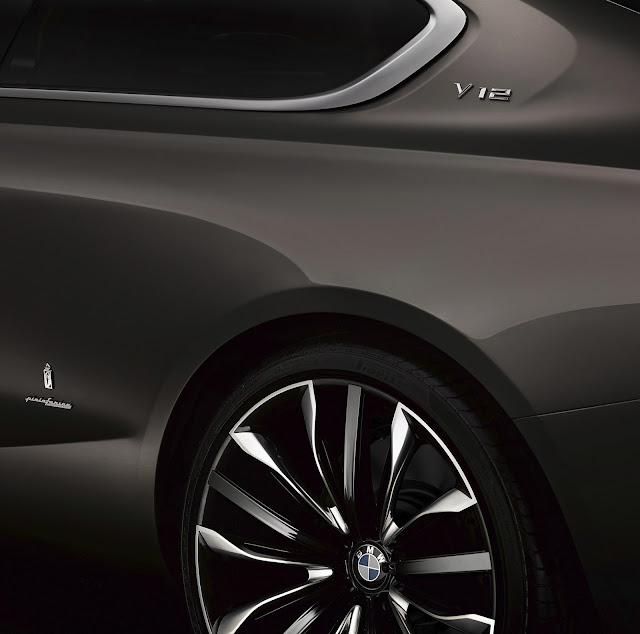